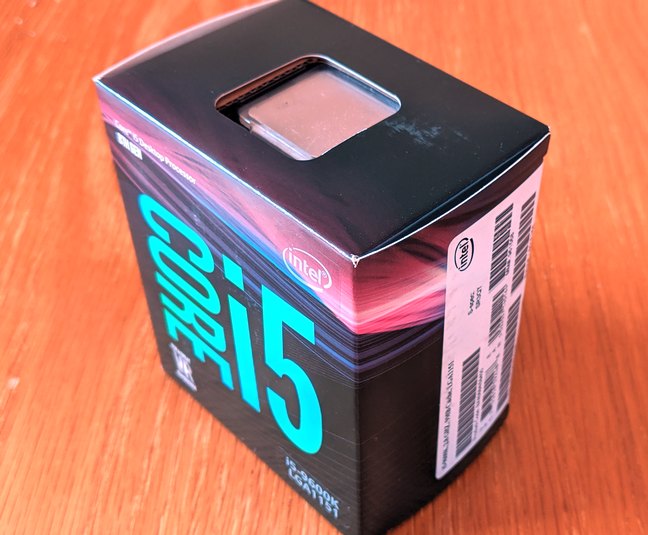 So I’m building a new PC and a lot of the components are coming from Amazon.

I ordered this Intel i5-9600K from Amazon (Sold by and fulfilled by Amazon – not a marketplace seller).

I had actually just returned an i5-9600KF which I’d bought incorrectly (didn’t spot the -F at the end of the part code) so I’d recently had my hands on a genuine 9th Gen i5 – The box of the one I received had an old feel to it, perhaps the printing wasn’t as vibrant or the folds as sharp but something just felt odd.

The alarm bells then immediately rang when I noticed it said ‘8th Gen’ on the box (i5-9600K is 9th gen – the clue’s in the name!). On the side was a barcode with an intel product code for an i5-8400 > which the box shown on amazon’s listing looks just like the one I received.

So it appears the fraudster has used an old box and printed new labels for it to say ‘i5-9600k’ – They didn’t do a good job though as they forgot to update the CPU speed shown on the part code label. When I saw ‘2.8GHz’ any doubt I had that something was wrong vanished (it should be 3.6GHz).
As is the way with CPU boxing you can also see the unit through a window:

Which I fond an identical picture of on this ebay listing where you can buy it for £6.90!!!

Obviously I called Amazon to explain what I’d found and to arrange a return/refund – they assured me it would be investigated when the item was returned to their fulfilment centre.

In the meantime I’ve ordered a replacement but as I really need it quickly I have no choice but to try re-ordering the exact same item from Amazon again as it’s available for delivery next day (a Sunday in this case).

Fingers crossed I get a genuine unit this time!

We use cookies to ensure that we give you the best experience on our website. If you continue to use this site we will assume that you are happy with it.OkPrivacy policy